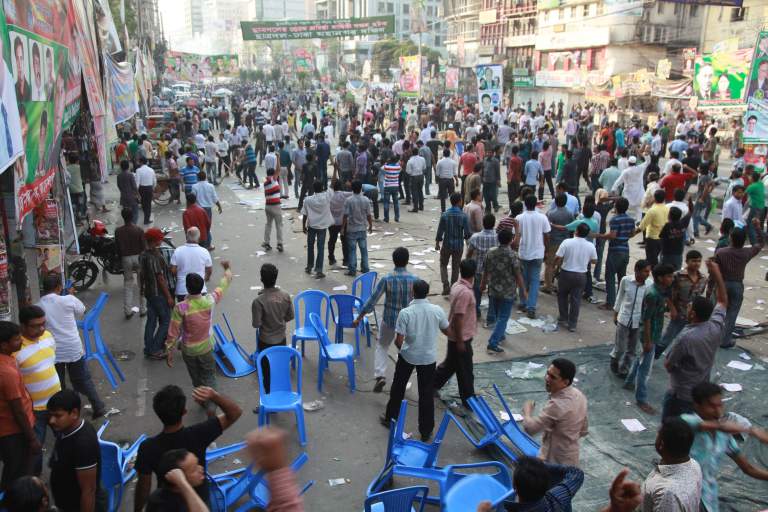 On March 6th 2013, photojournalist Nayem Ahmed Julhas was accidentally shot by riot police in front of the Paltan BNP head office. After a painful and elaborate surgical procedure nine out of 15 pellets were removed. Barely two months after such a major incident, Nayem Ahmed Julhas is now back to capturing news in real time. However, this was not the first time he has been injured in his line of work.

How it all started….

“It was 3:30pm. I was in my car, on my way to Paltan BNP office. There was supposed to be a protest rally that day and I was hoping to get a few good shots. The police stopped my car in front of Nightingale intersection (Kakrail). They asked me not to go further in that direction, which struck me as odd. I have covered a lot of political events in my career and have rarely been stopped from covering the news. They told me that my car might be at risk of arson in case a riot broke out. They seemed pretty sure about the prospect of an imminent riot, so I gave in. I parked my car nearby and came back to the scene on a motorbike driven by a fellow journalist. When I finally arrived in front of the BNP office I noticed two trucks parked back-to-back forming a makeshift stage. I greeted a few known faces, cops, journalists and politicians and worked my way up to the stage. I was elbowing my way through the crowd, trying to get a good shot of the rally. Suddenly, I heard a gunshot from Nightingale-Kakrail intersection. Apparently a few Jamaa’t-Shibir rioters had set off a few cocktails and were running towards us. The police reacted instantly, got into a defensive formation and braced for attack.”

And it was all downhill from there….

“Several men were running towards the rally. It seemed to me that they were hoping to blend in with the rally crowd. Hoping to escape the cops hot on their trails. The riot police present at the rally must have sensed their intention and they tried to resist. I tried to get down from the stage and move to a safer location, but there was practically no room. People were running in every direction, half a dozen men had a go at the police with chairs, bricks and whatever they could lay their hands on. The police fired in their general direction. Since I couldn’t get down from stage, I figured I should make the best of the situation and kept taking pictures. Amidst all the panic, fighting and shooting; 15 pellets hit me in the back. A typical rubber bullet has 75 pellets so I guess you can call me lucky.”

Out of the frying pan and into the fire….

“Right after I was shot, I instinctively ran from the scene seeking protection. I felt Sadek Hossain Khoka and several other BNP activists tugging at my arms. I followed them inside their office building. It wasn’t until when people were trying to pull down the shutters of the BNP office, that they noticed the blood on my shirt. ‘Let’s get him inside,’ yelled a voice from the crowd. Suddenly, I thought to myself, ‘what if some criminal elements of the party shot me inside the building and used my dead body for political motives?’ I made an excuse about not being seriously hurt and got out of their office and took shelter behind the giant tyres of the truck-stage.”

“One of the senior members of the riot police noticed me covered in blood and crouching behind trucks. He offered to give me a ride to Rajarbagh Police Hospital, but I refused again. I thought it would be best not getting involved with the police after being shot by them. I was walking towards Kakrail-Nightingale intersection hoping against hope to somehow make it to Dhaka Medical College. Fortunately, my fellow journalist Nabiullah Nabi from The Independent noticed me and helped me up on a rickshaw. He was with me the entire time until we reached DMC. At DMC I called another journalist friend of mine, Aminul Islam Babu. He was a medical correspondent from Jugantor and he had good connections at the hospital. He made sure that I was on my way to the OT as fast as possible. After several hours of surgery, the doctors were able to retrieve nine out of 15 bullet pellets that had hit me in the back. There are six pellets still lodged in my back. For the time being, it is too risky to have them surgically removed.”

The incident mentioned above is only one of many ordeals Julhas has faced in his line of work. On 25th May of 2005, he was shot in the chin. The impact nearly broke his jaw. This time he was hit by five pellets of a rubber bullet. Thankfully he got away with a broken tooth.  On October 13th 2007, Julhas had his face horribly disfigured by a large brick fragment that hit him squarely on his mouth. Ripping his upper lip into an upside down ‘Y’-like shape. It took cosmetic surgery and 35 stitches to get his face back to normal.

So why does Julhas keep doing what he does despite going through so many traumatising incidents? We asked him that. His response was accompanied by a nonchalant shrug, “Just doing my job. It’s a tough job, but someone has to do it.”

3 thoughts on “In the Line of Fire”