Before I begin my monologue, I would like to state that the following write-up is completely biased. I am taking a stand, and one cannot take a stand without choosing a side. Readers may regard this as an emotional outburst, if they wish to do so. 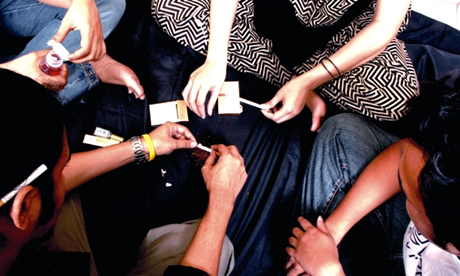 My story begins with an adolescent girl. Although admittedly I was not aware of her real age at the time this incident took place. Like a gargantuan portion of what she told everyone about her past, her real age was also shrouded in ambiguity.

Meet Nissan, a 17 year old A-level student. Nissan has been studying for her A-levels for as long as I have known her. And each time, she fails more miserably than the last. This is not because Nissan is a slow learner, au contraire she is one of the most intelligent people I have ever come across. No, Nissan suffers from a completely different ailment altogether. She’s a pathological meth-addict.

Nissan chased down her first amphetamine pill when she was 15, and she’s been hooked ever since. Her condition is so severe that she suffers regular bouts of extreme aggression and unpredictable mood swings if she refrains from chasing methamphetamine pills for more than a couple of days at a stretch.

She was far from being on her way towards becoming a responsible adult, her shoulders barely large enough to bear the pigheaded monkey on her back. Most days she would just sit in her balcony all by herself, trying to make sense of the world through the haze brought on by amphetamine pills, heavily medicated marijuana and psychoactive sleeping pills.

However, Nissan’s life has one silver lining; her mother. When Nissan’s mother found out about her daughter’s addiction, she handled it very delicately. She sat down with her daughter, confessed her own past indiscretions. Instead of losing her temper or breaking out in hysterics, Nissan’s mother spent an enormous time and effort building a rapport with her daughter. She gently urged Nissan to blurt out all the nitty gritty details of the path which had led down to her Yaba addiction. After assessing her daughter’s situation, Nissan’s mother realized there was no quick-fix to this problem. A typical reaction to such situations in our society is usually severe and often lethal.

Not too long ago, a 16 year old boy was chained down and locked up in his room by his parents, to prevent him from relapsing. Despite his young age, the boy was a seasoned addict. When his parents found out about his addiction, they tried cutting off his allowance. Within a matter of few days, his parents discovered that their son could be incredibly resourceful when he wanted to be. He had somehow acquired a mysterious source of funding.

His room had started to stink perpetually of strawberries and burnt rubber. Thin strips of foil were often found in the nooks and crannies of his bookshelves. Disfigured lighters with their metal caps broken off and flames set to their lowest settings kept cropping up everywhere. But the most obvious sign of amphetamine addiction was the boy himself. His usually fair complexion had a greyish tinge to it, and he had lost a tremendous amount of weight since he started chasing pills.

When threats and beatings no longer worked, the boy’s parents decided to chain him down and lock him up in his room. The doors were only opened a few times a day, to serve food and water. On the third day of his solitary confinement, when he was being unshackled for lunch; the boy smashed his glass on the floor. He grabbed for the broken fragment with the sharpest edge and sliced his own jugular vein. I distinctly remember the boy’s father saying to the reporters, “It happened so fast. I just sat there and watched my son die. He just died in front of my very eyes, and I could do nothing to help him.”

The boy’s story was the most shocking thing I had read in the newspapers for a long time. Until now.

On 16th August, 2013; Special Branch Inspector Mahfuzur Rahman (45) and his wife Swapna Begum’s (42) bloodied and mutilated carcasses were recovered from the bathroom of their apartment. Their 7 year old son Oihee and 15 year old daughter Oishy (according to her school certificates she was born in 1996) were missing along with the maid. According to the forensic expert present at the scene, the victims were murdered by amateurs, and more than one person was involved.

On Saturday, Oishy surrendered to the police. She had sent her brother to the apartment earlier on Friday and called her maternal uncle to pick him up; before surrendering to the police. According to the newspaper Manobzamin, Oishy stayed with her brother and her maid at her friend Tisha’s house the night of the murder, and at her friend Rony’s (or Jony, DB spokesperson seemed unsure of the name) aunt’s house on the following night. On Saturday afternoon, she finally turned herself over to the authorities, by walking into the Paltan Police Station and identifying herself to the officer in-charge.

Ever since her arrest, Oishy has been the centre of media attention. Despite being a minor, uncensored pictures of her face have been plastered on the front page of newspapers, tabloids and online news portals. Only a handful of media outlets were decent enough to pixelate her face. The police seem to be having a field day with this arrest. I assume it must be a refreshing change from all their recent failures (more than year has passed since the journalist couple Sagar-Runi was murdered in their own apartments, without any hint of the case being solved).

At the time this piece is being written, Oishy has been in remand for three days straight. The court has rejected all pleas for bail.  Oishy’s lawyer Mahbub Rana argued that Oishy, a minor, should not be remanded in police custody. He said the hearing should be stopped and shifted to a juvenile court, and interrogation, if necessary, could be done in lockup. According to National Human Rights Commission Chairman Mizanur Rahman, arresting a minor without verifying the age and informing the district probation officer is violation of children’s rights.

And yet, she is being tried as an adult. Being repeatedly photographed and interviewed by the media, and facing the dreadful interrogation in remand when she should be getting psychiatric help instead.

The Police are making comments willy-nilly, passing judgment on everything from the girl’s upbringing to her ‘promiscuous’ lifestyle involving multiple boyfriends. If she had a miniscule shot at a normal life, it was wiped away in a torrent of public shaming.  Her sensational tale is going viral in the social media networks, with Bangladeshis all over the world crying out for a death penalty. The girl has been crucified before her trial had even ended.

I urge the readers to picture themselves in this girl’s shoes. While you are reading this, a girl in her mid-teens is being torn apart by questions in a dreadful interrogation room. Her drug-addled mind struggling to distinguish nightmares from reality, while the rest of the world meticulously dissects and critiques her lifestyle and upbringing.

Now back to my ridiculous attempt at ending this diatribe on a high note. Nissan, the 17 year old crack-head I mentioned earlier is still struggling with her addiction. Her mother regularly accompanies her to therapy, and makes a point to spend as much as time with her daughter as possible. After suffering particularly vicious episode of withdrawal last week, Nissan waged war on every single breakable item in their living room. Her mother patiently sat through the whole ordeal, waited for her daughter to calm down. I had the good fortune of walking in on them right after the incident. Nissan was curled up in a fetal position, her body tremulous with sobs; while her mother gently ran her fingers through Nissan’s hair.

Nissan is still far from being cured. She has such violent episodes every other week. But the good news is that she is making progress, and her episodes are getting less and less frequent. With each passing day, Nissan gets one step closer to beating her addiction. A true David and Goliath story, made possible by a mother’s unyielding compassion for her daughter.

Published on 23rd August 2013, The Independent